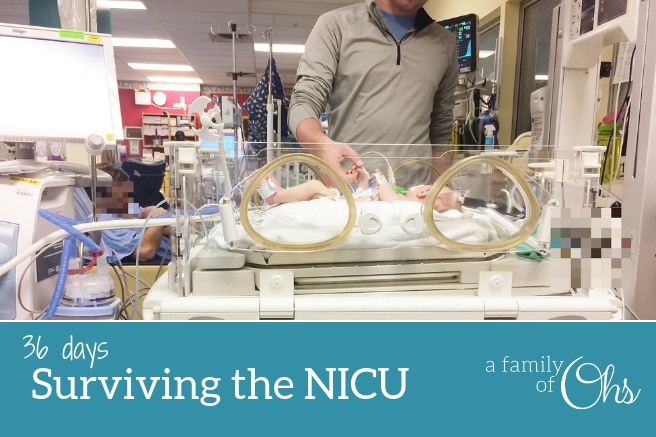 The first day that Maddison was in the Neonatal Intensive Care Unit (NICU) at BC Women’s Hospital was very intense. Within minutes of our arrival we were surrounded by doctors and nurses

(read about my experience with staff and hospital practices). Everyone worked very quickly and fluidly to transfer our little baby from the transport incubator into a cot. The Infant Transfer Team gave the hospital staff their run down on Maddison before turning to me to describe the events of the night before.

Trying my best to recount all the details that lead up to our arrival in the NICU, I spewed out every piece of information I thought was important like verbal diarrhea. I told the doctors that the pregnancy was healthy and the birth was quick. (read the birth story) I explained that there had been a substantial amount of amniotic fluid which had seemed a little peculiar. And finally, I describe how tense her body seemed; that her body would begin to shake and a desaturation of her blood oxygen levels would follow. 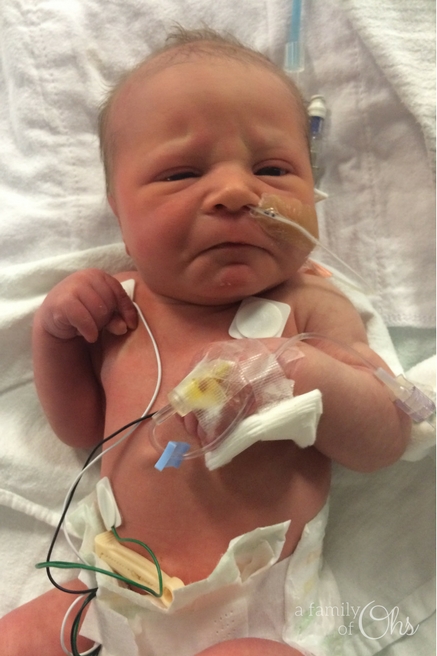 I didn’t know what to do

I sat and watched from a short distance for the majority of the first day as the nurses completed their assessment on Maddison. It was a little worrisome that no one really knew what the issue was or why she was shaking and not maintaining her sats. It was a very confusing time with a lot of unknowns. Was it all my fault? Did I do something wrong to hurt my baby?

They would have to start running tests as soon as possible in hopes of finding some answers.

I didn’t get to hold Maddison at all for her first full day in the outside world. I spent most of my time talking to doctors, and nurses, and trying to answer all their questions. After some time I started to feel like a broken record retelling our story over and over. Every doctor wanted to hear what was going on directly from me.

What to expect in the NICU

You will tell your story over and over again. I realized very early on that this wasn’t something I could get upset over. They were looking to me, being the parent, as being a crucial source of information trying to find a prognosis. It was comforting that I was able to be such an active participant in the whole process. 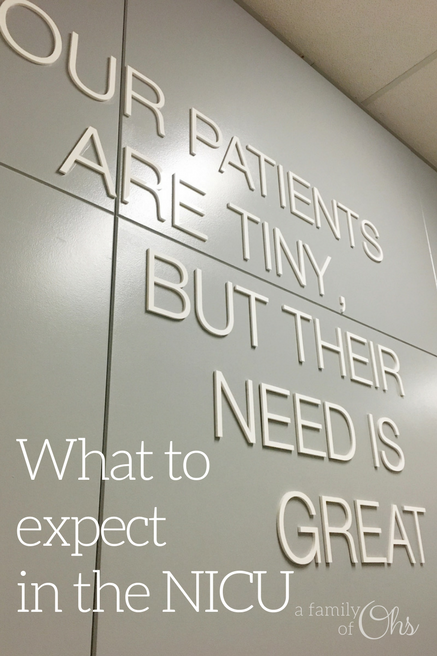 After 8 hours at the hospital it was time to go home. We were exhausted and needed rest. Although it is the strangest feeling in the world leaving your baby behind. I gave her a kiss on the forehead, knowing she would be well taken care of by the nurses. As we headed to our truck I was reading the name plates displayed on the walls. It felt like a knife stabbed me in the heart when I read “in memory of”. I couldn’t help but think, was my baby going to be a memory? I couldn’t read any more of them without getting emotional. My heart ached for those who had lost, and I had a growing concern that we could have the same fate. I prayed hard for God’s guidance and comfort. 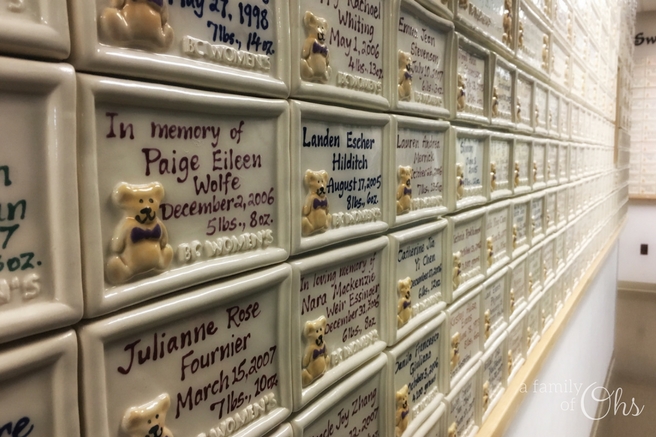 I had only cried once since the birth, but when the nurse laid Maddison in my arms I broke down. This was the first time since she went to the nursery the night after she was born that I had her in my arms. But I didn’t get to breathe in her sweet baby scent or cuddle her sweet baby skin. She smelt like hospital, and because of her jaundice she had to be wrapped in lights receiving her Phototherapy. I couldn’t even see her eyes. This wasn’t what I wanted. I wanted those sweet skin to skin cuddles without all the tubes and wires. But I had to get used to things not going my way, things were going to be different now. 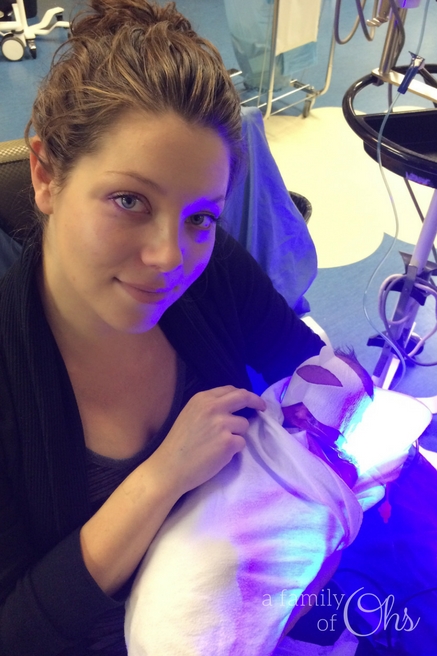 I so desperately wanted Maddison to nurse, but she wouldn’t open her mouth to feed when I would offer. So I had to resort to pumping if I wanted her to receive my milk. Once my milk did come in, they were able to put a nasogastric tube (NG) down. This gave us the opportunity to feed her small volumes of expressed milk as well as being supplemented with her IV. But Maddison’s heart rate would drop unexpectedly when we fed her and we didn’t know why.

We had discovered not only was her body very tense, but she couldn’t suck, or swallow. There was a suspicion that it could be something to do with her brain and they called for an electroencephalogram (EEG). The results came back that something wasn’t right and she was quickly queued up for an Magnetic resonance imaging (MRI).

We had to wait two very long days for the results from the MRI. The neurologist explained that what had been seen on the scan was a misfire happening in Maddison’s Basal Ganglia. This is the part of the brain the controls the motor function. It was most likely caused by a loss of oxygen through the umbilical cord, called a hypoxic trauma. This could be caused by the cord being pinched somehow. 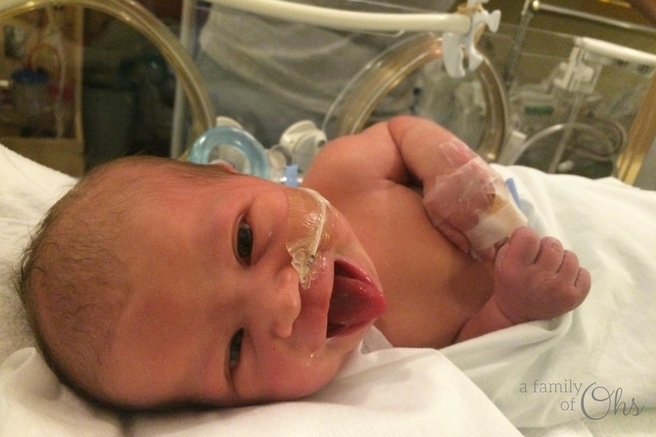 They suspect that the trauma happened sometime in the third trimester

As a result of the injury to her brain, Maddison stopped swallowing. This meant she wasn’t swallowing the amniotic fluid. This was why there was so much fluid when they had broken my water – She hadn’t been swallowing and digesting it.

They called her tense muscles as “hypertonia”, and explained that her shaking was probably caused by intense moments of hypertonia, and not a seizure. There is no answer if her brain would be able to correct itself in time through Neuroplasticity or if she would have difficulties reaching developmental milestones. We would just have to wait to see the extent of the damage.

It wasn’t my fault

The neurologist made it clear when he stared me straight in the eye and said,

You didn’t do this

And you know what? I believed him. I chose in that moment that I would never carry any blame for Maddison’s circumstances. What I chose was to be the best mother I could be for her and not let myself drown in any self pity. 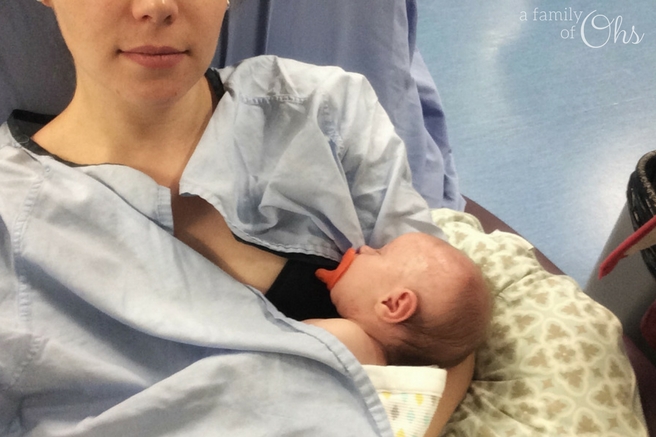 It was also made known in that meeting that the results from the MRI didn’t bring complete answers to Maddison’s condition. They expected to see greater damage to her brain than they did as she demonstrates far more issues than what the MRI revealed.

More testing would be need to be done

She was seen by nearly every department: Genetics, Biochemical Diseases and Metabolics, Cardiology, Ophthalmology, Neurology, and Orthopaedics. We had physiotherapist and occupational therapist appointments nearly daily. She had an echocardiogram (Echo) done on her heart, and she had an Upper GI X-ray (although she failed to complete the barium swallow). Her anatomy appeared to be fully and properly developed so they had to keep looking.

It was a constant stream of doctors and nurses, and everybody wanted blood work and urine samples. But it seemed that every tests came back with no answers. 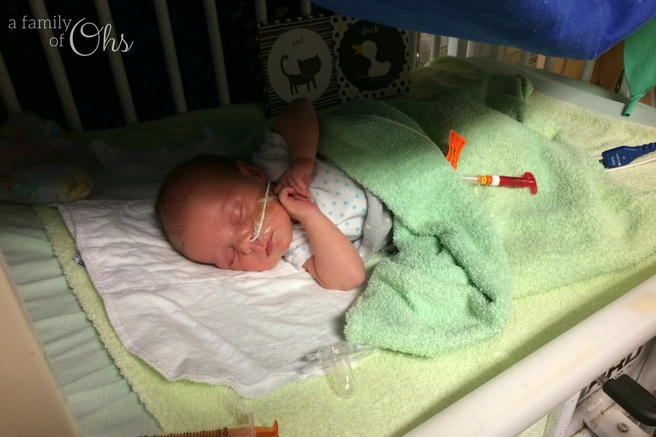 Because of Maddison’s unique case we were moved to a more consistent team of doctors and nurses called the Complex Care team. They specialized in patients that had multiple issues and required complex care like our Maddison.

When we asked our doctor how long we should expect to be in the hospital,

A baby’s stay is graded in days, weeks, or months. We don’t know how long Maddison will be here, but be prepared to be here for weeks.

Weeks? Did that mean two weeks, or three weeks?

No, it would turn out to be an exhausting five week stay.

The entire NICU stay was exhausting

Each day we had to make difficult decisions to either take the hour drive into Vancouver to sit in uncomfortable chairs and be with our baby, Maddison. Or, to stay at home and get rest and spend time with our son, Jackson. I was sleep deprived, stressed and torn between both of my children. Not to mention we were moving while all this was happening. We made the personal decision to take one day off a week, leaving Maddison in the very capable hands of the NICU staff so we could get some much needed rest. This choice was encouraged and supported by her nurses. 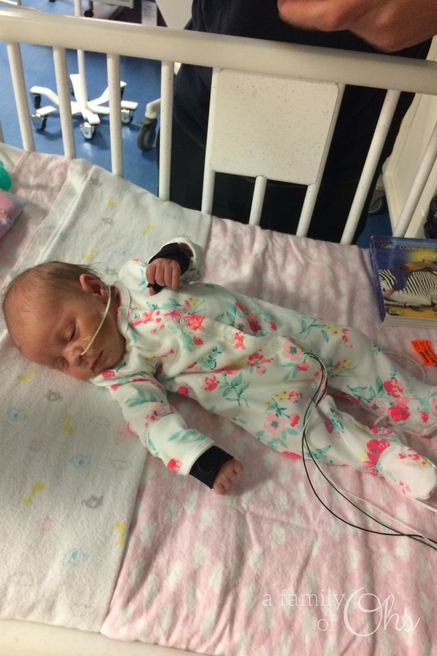 How were we going to feed her at home?

After 26 days in the NICU, Maddison had failed three feeding studies. She wouldn’t swallow and it didn’t appear she would be able to feed orally anytime soon. So on October 11th she had surgery to have her gastronomy tube (g-tube) placed. The procedure went as well as it could have, and although it took Maddison twelve hours to wake up from her anaesthetic, it was the best choice we made to be able to feed her. 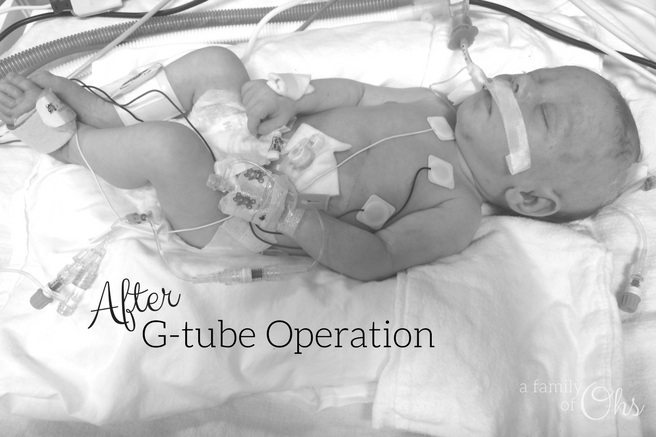 After the g-tube surgery Maddison was slowly becoming more stable. We didn’t have all the answers, and there was no complete diagnosis, but we were told she would be going home soon as long as she could maintain her sats.

We knew she had bad reflux and would spit up a lot. One day I was holding her and she started to make a strange face. I quickly realized she was choking. My eyes zipped back and forth between her face and the monitors, her heart rate was dropping. I instinctually just tipped her on her side as all the alarms started to ring and nurses came running over. As I moved her into a recovery position, the reflux that had been caught in her throat drained from her mouth and she started to breathe again.

Was this the answer to why her levels continually dropped?

She had been choking. Her reflux was coming up and she wasn’t able swallow it back down. This discovery was good news and bad news. Good news because it felt like we were getting more answers, but bad news because it also meant that she was at a high risk of choking, aspirating, and possibly drowning in her own saliva. We would have to monitor her carefully and make sure she was in a position that her reflux could drain out. 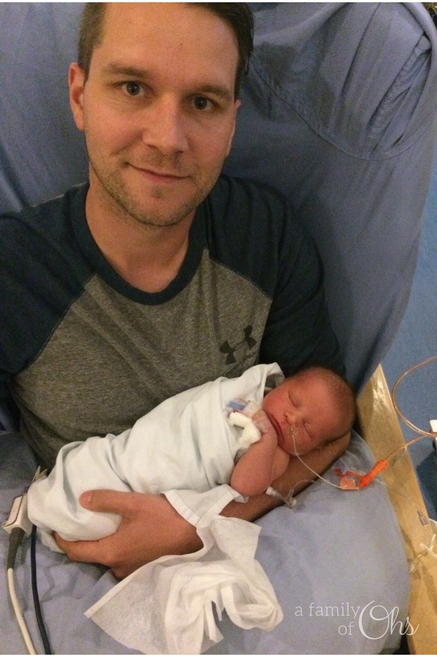 Things moved very quickly towards discharge after that discovery. We were still waiting on results from some blood work, but they would take months to come back. The doctors decided she didn’t need to be in the hospital anymore and we would be able to care for her at home. We received an oximeter to monitor her heart rate and oxygen levels on our own. And I’d have my eyes on her at all times making sure she was still breathing.

36 days felt life a lifetime for us

We had watched the seasons change from summer to fall, and it felt like a month of our life went missing. It was scary to think we would be going home without nurses and doctors to assist in Maddison’s care. The weight would be on our shoulders now. It was now our responsibility to keep this tiny person alive. But we so desperately wanted to be in our new home as a family. 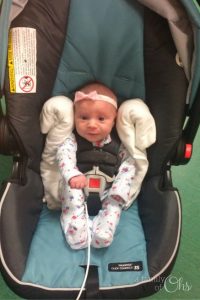 And on October 21st we loaded our tiny person into the truck and headed out for the most terrifying drive home of my life.

I have tried to share as much as I could into one blog post without rambling on forever. There is still much more that happened during our stay. If you feel curious, and want to know in more detail about anything pertaining to Maddison’s NICU stay, please feel free to leave a comment below and I’d be happy to answer your questions.

5 thoughts on “Surviving the NICU”