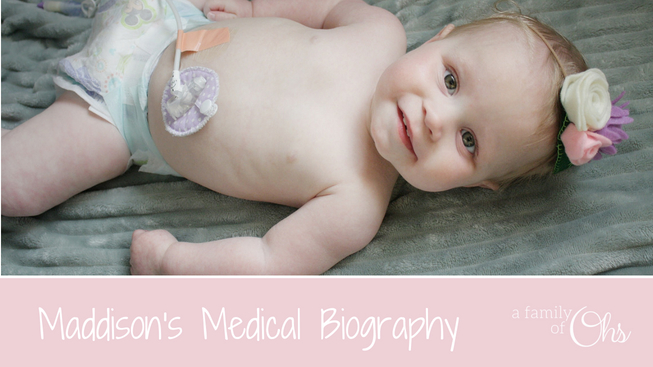 Maddison is what her doctors refer to as a Complex Case

She has many medical issues. Some issues are connected, and some are not. Because of these medical issues her life looks a lot different than her brother’s. But that doesn’t diminish her value as a human being one little bit.

Maddison was born full term at 39 weeks and 4 days. The pregnancy had been very healthy, and no obvious signs something was wrong. We shared in her birth story that the labour and birth were quick and without complications.

An Magnetic resonance imaging (MRI) showed that Maddison had suffered a possible hypoxic brain trauma at some point in the third trimester. The current prognosis is that Maddison’s brain suffered damage due to the lack of oxygen received through the umbilical cord, but we do not know for sure as there are many things that do not add up about Maddison’s case.

A most recent MRI has revealed much more about Maddison’s brain than we originally knew:

How is her body affected?

Two of the areas of the brain that show abnormalities are her left basal ganglia, and both her thalamus. Both these parts of the brain controls motor function and movement. It is how the brain communicates with the body and tells the muscles what to do. The thalamus being the main hub of sensory processing and relaying motor function signals throughout the brain.

Maddison was described to have  Hypertonic Muscle Tone (Spasticity) for the first couple months of her life. What this meant was that there are muscles throughout her body that would be very tense and flex against her will. Even while she was at rest her body would demonstrate moments of “high tone” or display spastic movement.

The lack of proper communication that Maddison’s brain has with the rest of her body causes her to struggle to meet many developmental milestones in a timely manner. This is called being developmentally delayed. After eight months of age, Maddison’s body tone greatly started to relax, and she is currently considered to have Hypotonic Muscle Tone. Maddison’s brain still struggles to properly communicate with the rest of her body. It is a constant effort for her to control her body and tell it what to do.

What is the diagnosis?

We currently don’t have a formal diagnosis, but we are currently left with atypical cerebral palsy as a prognosis.

While Cerebral Palsy (pronounced seh-ree-brel pawl-zee) is a blanket term commonly referred to as “CP” and described by loss or impairment of motor function, Cerebral Palsy is actually caused by brain damage. The brain damage is caused by brain injury or abnormal development of the brain that occurs while a child’s brain is still developing — before birth, during birth, or immediately after birth.

The reason why she hasn’t been fully diagnosed yet is that a lot about Maddison’s brain isn’t clear. The injury that is shown on her MRI is far smaller than the symptoms her body is demonstrating.

Thankfully, in infancy her brain is still developing. The neurons in her brain can make new paths to properly communicate with the rest of her body. This is called Neuroplasticity. In short, her brain may rewrite itself, allowing her to regain control of the muscle movement in her body.

What do the doctors think?

Her neurologist and metabolic doctor both agree that the abnormalities on her brain that was shown on her MRI doesn’t fully explain what is being demonstrated by her body. They speculate that she is showing signs that there might be more to the picture.

After a lengthy hospital stay in September/October of 2016 Maddison’s genetic doctor concluded that a Whole Exome Sequencing should be preformed on her. Unfortunately the results were inconclusive at finding a genetic diagnosis for Maddison.

Maddison is also part of a research study which is preforming Whole Genome Sequencing. This study would go further in-depth than the Whole Exome Sequencing. They are taking a microscopic look at Maddison’s genes, and maybe they will be able to find some answers.

It is speculated by her doctors that Maddison forgot how to swallow in the womb. She had stopped swallowing the amniotic fluid and that is why I was so full of fluid when they broke my water. Maddison failed many swallow studies in the early months of her life. And was placed with a feeding tube to provide her with nutrition. Over time Maddison has been able to learn how to swallow – a grand accomplishment in itself. However, her swallow is still immature, and she is not able to sustain her body’s entire caloric requirements orally so her intake is still supplemented by tube feeding.

Maddison is extremely motivated by food, and it has helped her gain more control over her swallow. Although not perfect, she can swallow and protect her airways as she hasn’t shown any signs that she is in danger of aspiration.

Maddison currently receives all her nutrition through gastronomy tube. She first received her g-tube through a surgical operation in October 2016. But after extreme reflux, and severe loss of weight we switched to feeding into the jejunum (small intestine) when we switched to the gastro-jejunal feeding tube (G/J tube) in September 2017. In March 2019 we were able to switch Maddison back to a g-tube.

She now has a little button called a G Mic-key that we are able to use her orange Infinity Feeding Pump to  feed her nutrition into her stomach.

What about her reflux?

Maddison’s reflux has been a big issue since she started feeding, and has continued to be a consistent and serious problem. We have to be very diligent watching her as drowning in her own reflux is a very scary reality.

There are so many factors causing her to reflux. We’ve tried almost every trick; kept in an upright position, no moving during feeding or 30 mins after feed, rice cereal in feed, blended diet, medications, different kinds of formula, slower feed rates, smaller feed volumes and chiropractic care.

Switching to feeding through the J-tube Maddison’s reflux has almost been eliminated. It gave Maddison time to grow and get stronger. Since switching back to feeding into the stomach, Maddison has shown she still has some minor reflux, but can manage her tube feeds without large complications.

She currently takes the medication Ranitidine to eliminate the burn of the reflux, and Domperidone for motility.

Maddison was discovered to have a growth hormone deficiency after a stimulation test in November 2018. We have since started growth hormone therapy on Maddison by doing injections each night. With the assistance of the hormone therapy, her doctors believe we will see large improvements in Maddison’s growth, strength, and feeding.

What about her hips?

Maddison has Developmental Hip Dysplasia. She has the perfect recipe for this diagnosis: caucasian female with shallow hip sockets and high muscle tone. It was discovered within hours of her birth that her hips dislocate. After more thorough investigation we discovered that both her hips were dislocated. After a failed attempt with the Pavlik Harness she would need surgery to correct her hips (Read our journey with the Pavlik Harness). Her surgery date to have her hips properly placed and casted in a Spica Cast was on June 15th, 2017. Read part 1 of the Spica Story here. Read part 2 of the Spica Story here.

She has now graduated from the Rhino Cruiser. As of 2019, she has been given a thumbs up from her orthopaedic surgeon that her hips are in socket and are developing nicely.

Who makes her care plan?

We work very closely with all the people on her care team to create and adapt Maddison’s care plan when needed. The trained professionals we regularly meet with are:

With complex needs the cost can burden a family

We receive Canadian government funded support through the At Home Program. The program includes funded feeding and medical supplies, specialized equipment, nursing support and homemaking support.  This helps relieve some of the burdensome finances, and household chores while raising a child who requires special care.

Lastly, the most important person caring for her is God

God is the one who knit her together – perfectly. God doesn’t make any mistakes, and there is a purpose to His plan. He is the one who can defy science and medicine and bring healing to her body. We pray God will provide Maddison with full healing, but above all we pray for His will to be done. Maddison is a masterpiece in His eyes and He isn’t finished with her yet.

10 So do not fear, for I am with you; do not be dismayed, for I am your God. I will strengthen you and help you; I will uphold you with my righteous right hand. Isaiah 41:10 NIV