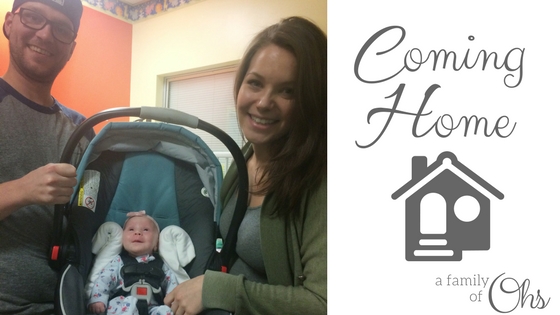 The scariest drive of our lives

The entire time that Maddison was in the NICU at BC Women’s Hospital our family had been staying with my husbands’ parents. We were in the middle of moving houses and we didn’t receive the keys to our new home until the middle of her hospital stay.

I would have loved to have been using my spare time to unpack boxes, but our new home would be another hour drive further away from the hospital. It wouldn’t have been possible to spend four hours travelling back and forth from the hospital each day. Thankfully my in-laws continued to let us stay. 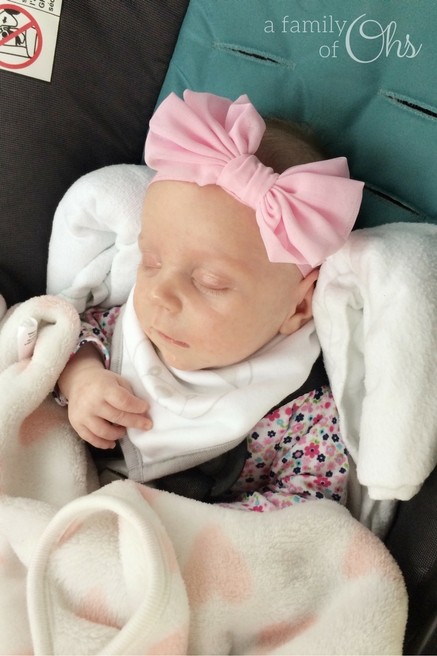 By the time Maddison would be released we would be able to move her to our new home in Chilliwack. The house was practically move-in ready when we bought it, but we still had to move our stuff in. If it wasn’t for all the help we received from the our friends and families, I don’t know how we would have been able to do it. A special shout out to the crew from the Township of Langley Fire Department where Alastair works. It was an overwhelming turn out of helpers, unloading boxes and setting up furniture in record time. Everyone was busy cleaning, painting, and unpacking. We wouldn’t have make it through that time in our lives without all the help we received. We will be forever grateful.

I had had so many expectations

Before Maddison was born I expected I would be lounging around the house in pajamas all day. I’d be snuggling my baby and watching cartoons with my son. I expected that I’d slowly unpack and set up our new home, but so many things had changed. Things would be far from relaxing. Now I was bringing home a baby that required so much more care than the average newborn.

I would have to coordinate all her appointments, meet with therapists, monitor her oximeter, and learn how to feed through a g-tube. Not to mention she couldn’t swallow, so we would have to constantly watch to make sure she wasn’t choking. We’d be doing all of this while trying to establish our new home, juggling life with our toddler, and the dog. All while still trying to “take care of myself”. I really didn’t know how I was going to handle it all. Thankfully my parents came to stay for a while and give us a hand getting settled.

Things started to line up so we’d be able to take Maddison home. She was more stable for transport, and we were cautiously ready to take on the full responsibility of her care. After Maddison passed her car seat test we were ready for discharge. On October 21st, we switched her hospital monitors over to our portable oximeter, loaded her up in her car seat and gave our thanks to the doctors and nurses for all their care. After 36 days in the NICU, we finally took Maddison home.

Now to get her home

It was the strangest feeling being able to carry her through the doors to the outside for the first time. She hadn’t felt sunshine on her face for the entire first month of her life. I couldn’t wait for her to start experiencing life beyond the walls of the hospital. 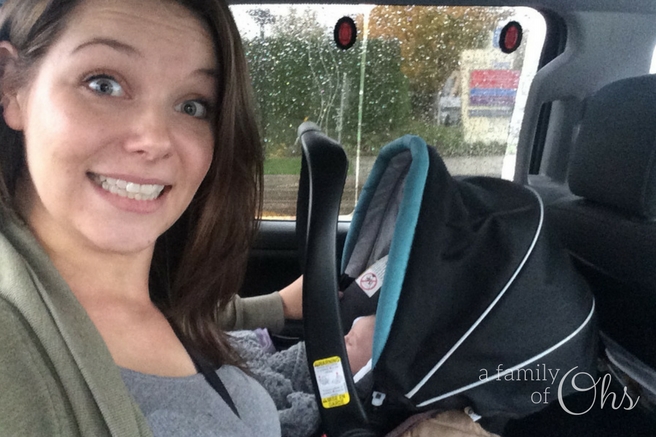 Alastair drove as I sat in the backseat, nervously excited. I couldn’t believe we were actually taking her home. I just kept praying, 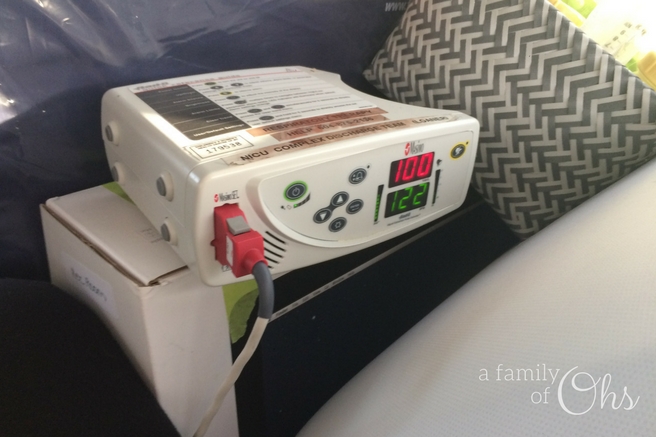 We were advised it could be dangerous to do a g-tube feed for her while traveling because she would have a high chance of reflux. So we timed our departure in a way that we would have a couple hours to get home before her next g-tube feed. I was giving myself a pep talk in the back seat of the truck as we drove,

We got this, it’s going to be great, there won’t be any problems

If you have ever tried to leave Vancouver, on a Friday, at 3 pm, you will know you aren’t going anywhere fast.

We got this, everything is going to be fine

Maddison was sleeping peacefully as it had started pouring rain. We were crawling in traffic along the Port Mann Bridge. I looked over at her monitor and noticed her heart rate was starting to drop, then her oxygen levels dropped, the monitor alarms started to ring.

My hands were shaking – I didn’t know what I was going to do. She was struggling with a reflux coming up and we weren’t even feeding her. I was so thankful I had brought my Snotsucker from NoseFrida. I shoved it up her nose and sucked with all my might. We had seen the nurses use the suction machine in the hospital, and I was hoping the Snot Sucker would work the same way. Sure enough I was able to get what was caught out. Her sats came back up and she continued breathing.

The hospital had made sure we had respiratory training before we left. I was so thankful the things we had learned were still fresh in my mind. I knew if things had gotten worse I would have taken her out of the car seat, put her on her stomach (using positional drainage) and back blows if necessary, luckily we didn’t have to. 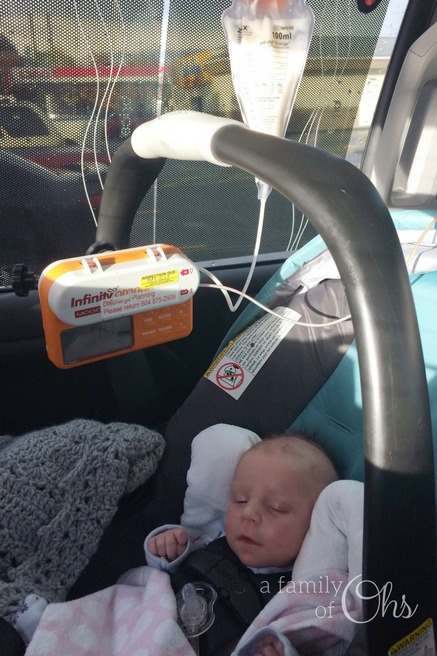 to help her. It has helped us so many times, and it works so well. (We have two now, and one goes wherever Maddison goes)

The drive home should have only taken an hour and forty five minutes. Instead it took an excruciating three hours. It had taken so long that I ended up having to pump in the back seat while we were driving down the highway, so we would have milk to feed Maddison. We had no choice but to feed her in her car seat. I was sweating the entire way, I was so nervous. I was still trying to figure everything out, I felt like I didn’t even knew my own baby. 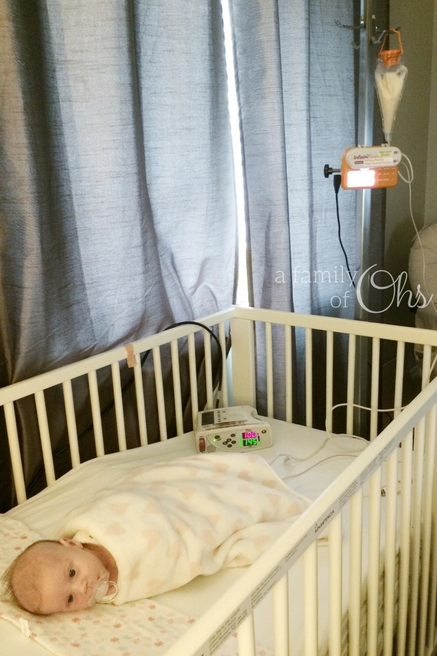 When we arrived to our home I had a sense of relief that we made it in one piece. We were finally home, and as we brought Maddison in to greet Jackson I knew our family could officially set root in our new home as a family of four. 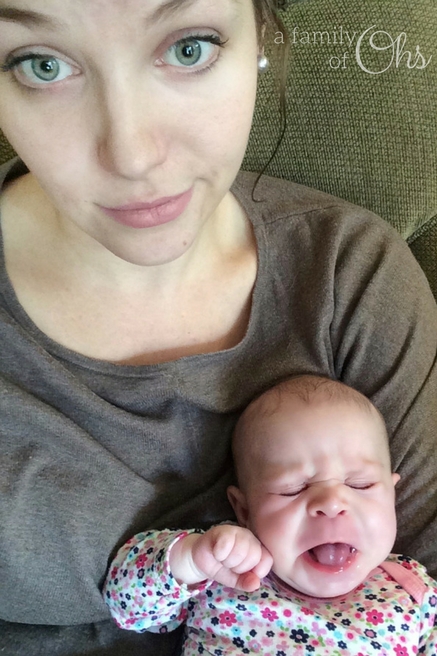 We wouldn’t get a lot of time to relax, Maddison’s alarm would beep and our hearts would start pounding as we jumped to her aid. Nothing ever got too serious, but it’s still scary. Life was busy at home, I was pumping and doing g-tube feeds every four hours. A small part of me missed her being cared for by nurses through the night, but I was more thankful she was home and we were finally all together as a family.

We didn’t say good-bye forever to BC Children’s Hospital. Two days later we made the drive back to meet with Maddison’s Orthopaedic doctor for her Hip Dysplasia.

As I finally published this blog post, +8 months later, I look back on all the fears and confusion I felt during that time. And you know what? It got better. Trusting that God had a plan, we quickly established our routine and found our groove. I now feel so confident in caring for Maddison.

I can do a g-tube feed in my sleep, feeding her is second nature to me. Yes things weren’t the way I had dreamed or imagined, but it’s all okay. We’re okay. I have a joy, a peace and a calmness now that I can only account to being God’s work in my life. His faithfulness has brought us through. I hope that if there is someone out there who just had their lives changed because of a special needs child, that they would know they will find their groove too. Life is going to be different, but It’s going to be okay.

This post contains affiliate links. We share these links with our readers because they are products we use and love. To read more about our stance on affiliate links, head on over to our Disclosure Policy.