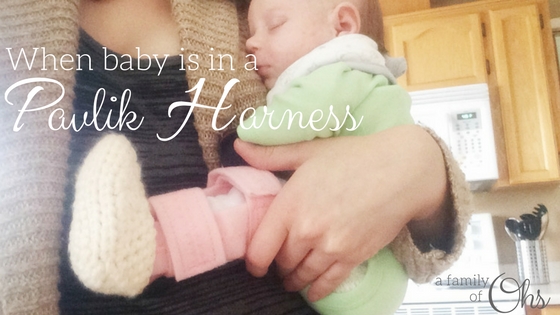 We were home for a total of two days before we had to take Maddison back to BC Children’s Hospital. This time it was to meet with her Orthopaedic doctor about her hips. When Maddison was in the NICU there was mention that Maddison had Developmental Dysplasia of the Hips (DDH), but we didn’t know what it was, or what we could expect to correct it.
I didn’t feel like we had been home long enough with Maddison to feel fully at ease caring for her. So the drive from our home in Chilliwack into Vancouver for our appointment was just as nerve wracking as our first drive home. Alastair drove as I sat in the backseat keeping my eyes on Maddison and the monitor, making sure she wasn’t choking on some reflux.

We met with the doctor and nurse for the diagnosis

They explained to us that with Maddison’s shallow hip sockets, the fact she was a girl, and the amount of muscle tone pulling on her legs, she was a prime candidate for Hip Dysplasia (even though we don’t have a family history of DDH and she wasn’t breached).

They had the results from an earlier ultrasound on her hips and in that moment they could tell both her hips were dislocated. It didn’t appear that she was in any pain from the dislocation, but it was painful for her trying to get her hips into the right position. The tightness of her inner thigh ligaments and her hypertonic muscles being flexed made it almost impossible to stretch her legs out into the optimal “frog-like” position so they would have to adjust things slowly.

The nurse gave us a little more background on DDH and how important it was for them to work on getting her hips to develop in the socket. The first line of defense to counteract the DDH would be to have Maddison wear a Pavlik harness. It would be used to hold her legs out, giving the cartilage around the hip bone a chance to develop properly in the hip socket. Doing this intervention now could save her from hip troubles down the road. If it didn’t work there would be a possibility of surgery.

But they reassured us that it works the majority of the time. 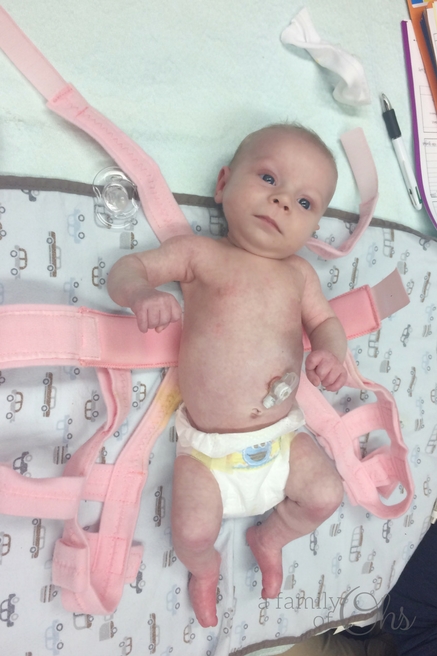 There was no decision to be made

Right then and there Maddison was strapped into this darling little pink Velcro harness (please sense the sarcasm in my voice). There are nine Velcro straps: two for the shoulders, one across the chest, one each on front of the legs, one each behind the legs, and two to secure each leg. She would need to be in the harness for 6 to 8 weeks, 24 hours a day with a possibility of moving to 23 hours a day after two weeks. 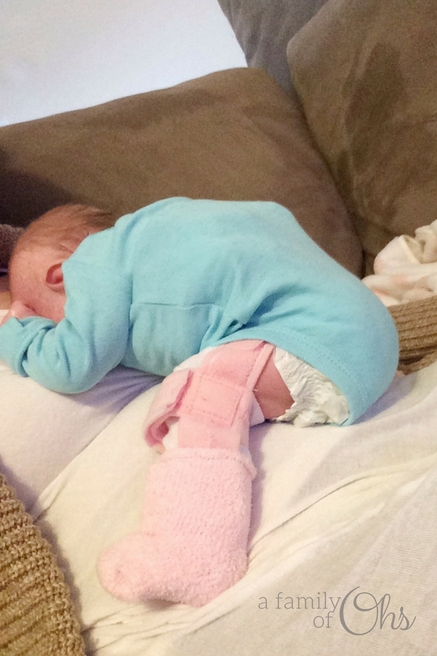 Yes, yes they do

I am not the first mom whose had to adjust their lives because of DDH. Our nurse was patient with me. She answered my questions and walked me through what things would look like now that we had a baby in a Pavlik Harness. I was concerned with positioning her for her reflux, and what about her stretching and therapy?

Our nurse took the time to explain that Maddison’s legs had to be kept apart at all times. That you can put a rolled up receiving blanket in between the legs for support so she can sleep on her side to help drain the reflux. She demonstrated for me how to put a diaper on underneath the harness. And that you can still baby wear with the Pavlik as long as her hips were kept apart (so no sling carry).

We would have to adapt her stretching and therapy regime to focus more on massaging the muscles. Because Maddison couldn’t breastfeed, we didn’t have to try nursing our baby in the Pavlik. But we were able to still easily do her tube feedings.

Detailed tips on dealing with the Pavlik

The nurse answered our questions and then turned to my husband,

Keep and eye on your wife. She now has a barrier between her and her baby. Skin on skin is going to be harder to do now, and this effects moms negatively. She is going to need your help until she gets used to this change.

With that, she told us to take our time leaving. She must have known what comes next.

Bring on the tears

I waited till she left the room and then I broke down. I was sobbing, full on ugly crying. Alastair hugged me and let me cry it out. I felt defeated, like we just couldn’t win. What’s “one more thing”!

It took me a couple days until I had come to terms with how things would be now. I now think of it like changing diapers: no one really likes it, but you don’t have a choice in the matter, so you suck it up. Next thing you know, it’s just like second nature, you don’t give it two thoughts, you just get it done. Read our tips on the Pavlik Harness here.

We would have to come back every two weeks to have her harness adjusted. Our fingers were crossed that she would be able to graduate and be allowed one hour a day harness-free for baths and skin on skin time. 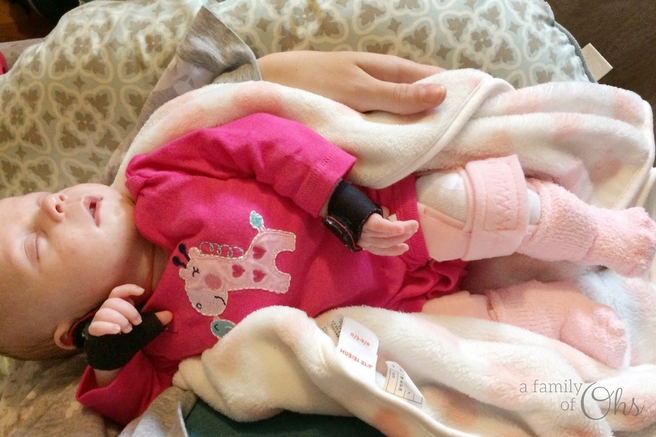 At her first two week checkup the doctor was happy with the progress and let us know that Maddison would be allowed one hour a day to have a bath and get some skin on skin cuddles. I felt victorious. It was the best gift I could have received in that moment. I would finally be able to properly cuddle my baby.

After seven weeks Maddison had an ultrasound done to her hips to check the development. Much to our disappointment, the Pavlik didn’t work. Both of her hips were still dislocated even in the harness. We had done everything we could, but now it looked like surgery would be our only other option. 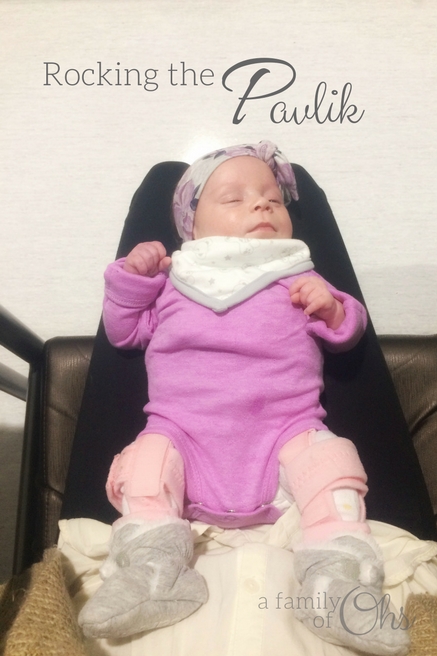 For now I was excited that we finally got to say good-bye to the Velcro for good. I could enjoy my baby snuggles once again. I probably should have burned the harness, but it’s tucked away in a memory box. Although it doesn’t hold pleasant memories, it’s part of Maddison’s past and I want to remember what we’ve been through.

On June 21st, Maddison had a double open reduction and was placed in a spica cast in hopes of correcting the DDH once and for all.