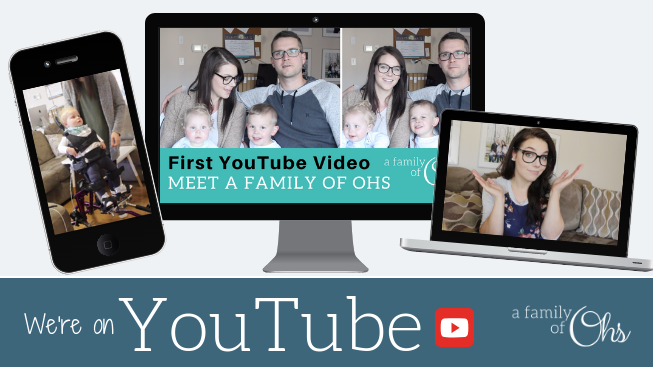 Meet a Family of Ohs

On October 26, 2018, we took the plunge and launched our family’s YouTube channel! We’ve been sharing our life on our blog here, as well as our social media channels through Facebook and Instagram. But we’ve been wanting to be able to reach a larger audience – and hopefully impact more people – so we made our first YouTube video.

The idea to start a YouTube channel came after I had received some requests through our Instagram. I had done a couple tutorials for our Instagram stories. I was trying to showcase small snippets of how we do things for Maddison. Things about her feeding tube, and how to run her feeds. But I was limited to quick 15-sec chunks, as that’s how long IG story segments are. I had thought about filming YouTube videos before, and after there was so much support from our followers I felt encouraged to take the plunge.

I had watched a bunch of YouTube tutorials on how to start my own YouTube channel. Trying to understand what I was getting myself into. Now, I wouldn’t be making any purchases since I don’t really anticipate our channel being a source of income. I was, however, very fortunate that the camera I already owned had filming capabilities, and I had a tripod. So I played around with the camera and filmed little clips of our family before I sat down and wrote out the first script. The first video would be an introduction to our family, and especially Maddison, since she is the reason why we share our life publicly. I knew I would also need a disclaimer in the videos as I would be talking about specific medical scinareos that applied only to Maddison and I didn’t want to wrongly mislead anyone. You gotta be careful with that kind of stuff!

So without really knowing what I was doing we filmed out first video. I played around and edited it in iMovie. Next thing I knew I was uploading it to YouTube and clicking publish!

So here we are, introducing the YouTube world to a Family of Ohs: